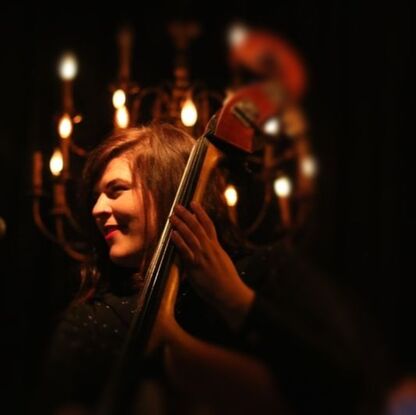 MARINA CHRISTOPHER is a rising star in the Seattle jazz scene. Earshot Jazz Magazine named her the Emerging Artist of 2017, and she took home the honorable mention from the Kobe-Seattle Jazz Vocalist contest in 2018. Her style of jazz enthusiastically embraces the music of pop and RnB, and her bass playing, singing and song-writing has an infectious feeling of joy. Marina’s trio is a rotating roster of top players in Seattle. Do not miss the artist The Seattle Times declared one “you should get to know”.

Marina was born in Seattle, Washington. She began playing the electric bass at age 11 and began playing the upright bass a year later. She grew up listening to her father play jazz and boogie woogie at the piano. This opened Marina up to wide range of music at a young age.

Marina earned a Bachelor of Arts degree in Classical Double Bass Performance from Central Washington University, where she studied with Jon Hamar. After college, she worked in the orchestra of Royal Caribbean cruise ship, entertaining passengers from all over the world with her fabulous bass playing!

Since returning to land, Marina has shared the stage with performers such as Stone Gossard, Meklit Hadero, Eugenie Jones, and Billy Brandt. She is currently a regular member of the musical groups The Bad News Botanists, Jerett Samples and Paula Boggs Band. Marina was a founding member of the Mo Jam Mondays at the Nectar Lounge, and has since been the featured artist several times. Marina's original tune "Self Love" was featured on Mo' Jam Mondays on Band in Seattle. Come Spring 2019, Marina will hit the road as the electric bassist for The Portland Cello Project.

Singing and song-writing have become Marina's most recent musical endeavor. On March 14, 2015, she released her self-titled EP, which showcases her talents. She sings and writes in a style that seamlessly blends jazz and pop, and her voice is something all her own. Marina released her full length record, "Must Love Cats", on September 2, 2016.  Although Marina happily continues to accompany many other musicians, you can count on seeing her perform more and more as a featured artist. She plays with her trio every first Thursday at Vito's Lounge, every second Saturday at the Paragon on Queen Anne, and regularly at The Edgewater Hotel. Marina is available for private functions and events. Please contact Marina for more information.

In July 2018, Marina will released an album of her own music with her band Marina and the Dreamboats. She writes and arranges for this 9+ plus piece group and they are quickly gaining a following in Seattle. They have opened for The Hot 8 Brass Band and D'Vonne Lewis' Limited Edition.

In addition to performing, Marina teaches privately as well as for several institutions. At Washington Middle School, Marina directs the Junior Jazz band. Marina also teaches groups and work shops for Seattle JazzEd. You can also find her teaching classes at Jazz Night School. Marina is currently accepting new students to her private lesson studio in Mountlake Terrace, Washington.
You can also find Marina on: